West Meets East in Dutch Art of the Seventeenth Century

For someone who, for all we know, never left his native country, Rembrandt Harmensz. van Rijn had a strikingly broad horizon. As an artist, collector, and citizen, he came into contact with artifacts, objects of utility, and humans from all parts of the known world. Rembrandt’s curiosity about everything foreign and his insatiable collector’s appetite were legendary even in his lifetime and part and parcel of his singular creative genius.

Amsterdam, the center of his life, was the perfect place for a man of such boundless interests: the Dutch East and West India Companies had their headquarters and home port here, as did other trading partnerships. In the seventeenth century, the city was a true cultural melting pot. Legates and merchants from far-flung places were a daily sight in the streets of the young Dutch Republic.

The exhibition focuses on one of the most consequential strands in this constellation: the Orient—an umbrella term for diverse Eastern non-European cultures rather than a well-defined geographic designation—fired Rembrandt’s imagination throughout his career. It inspired the painter has he envisioned the settings of biblical histories, one of his favorite genres. Several self-portraits show the artist in exotic costumes. His copies of miniatures created at the court of the Great Mughals were a tribute to Asian creativity and taste without precedent in Dutch art. Last but not least, he was an eager consumer of Japanese paper, which he liked to use for his etchings.

The selection of exhibits is not limited to Rembrandt’s oeuvre. In addition to works by his colleagues and students, the presentation includes publications and other sources that illustrate the contemporary vision of the Orient. Placing Rembrandt’s work in this broader context reveals both the ways in which his take on the East was typical of his time and what set his perspective on its cultures apart from those of his contemporaries. And there is yet another reason why Rembrandt’s Orient scrutinizes Golden-Age Dutch artists’ responses to Eastern artifacts: by contrasting their own daily surroundings with these models, they made a key contribution to the genesis and definition of the specific European identity that to this day has remained a subject of ongoing renegotiation.

The catalog to the exhibition "Rembrandts Orient" examines how the painters of the Dutch Golden Age reacted to the areas of the Near, Middle and Far East that came to the fore through trade, travel and publications. The foreign was a charming contrast to the own, but it hardly aroused deeper sympathy. That was in the 17th century. What is it like today? The catalog invites us to reflect on this. 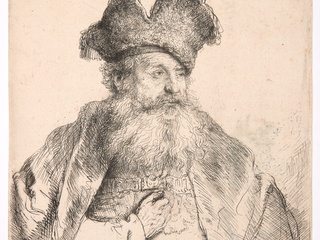 Save the date
Show all events