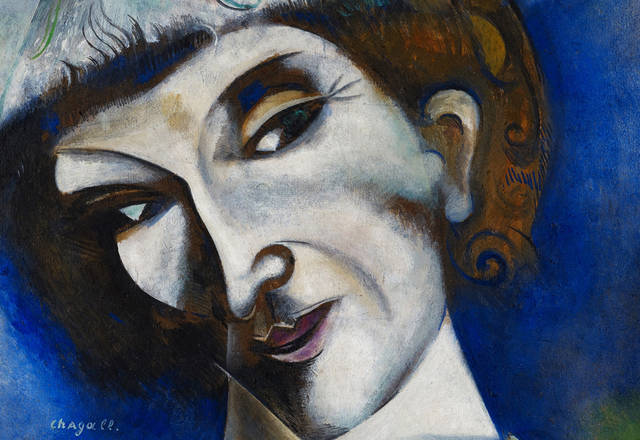 This exhibition explores the early work of Marc Chagall. His creative breakthrough came at a time when his life was torn between contrasting experiences. Chagall lived in Paris from 1911 until 1914, creating paintings that combined his recollections of Russian provincial life with iconic fragments of the metropolis around him. Reminiscences of Russian folk art make an appearance in his works from the period, as do the most recent stylistic experiments he was exposed to through his life in the center of the artistic avant-garde and his acquaintance with many of the most progressive artists, including Picasso, Robert and Sonja Delaunay, and Jacques Lipchitz.
Overtaken by the outbreak of World War I during a visit back home, Chagall was forced to spend the next eight years in Russia. The unexpected change of circumstances initially prompted a phase of searching self-scrutiny that speaks from many paintings and works on paper created in and after 1914. The artist produced numerous self-portraits, depictions of Jewish life, and designs for the stage setting for the celebration of the first anniversary of the October Revolution that he organized in his role as the commissar for arts and director of the art school in Vitebsk in 1918.
We display a representative selection of works from what was for Chagall a period of rapid artistic evolution and personal as well as political upheaval. The core of the show consists of the extraordinary ensemble of major paintings in the collections of the Kunstmuseum Basel and the Im Obersteg Foundation as well as eminent works on loan from Swiss and international private and public collections. They are complemented by documentary ethnographic photographs the Russian artist Solomon Yudovin took in 1912–1914 during the so-called Gintsburg Expeditions into Russia’s shtetlekh, in an attempt to capture a world constantly endangered by pogroms, political unrest and social dynamics. Yudovin’s photographs preserve the rich traditions of shtetl life that profoundly informed Chagall’s oeuvre.

The images provided by the Kunstmuseum Basel are only available to journalists for publication in their media. The use of the pictures for further purposes (advertising and other commercial use) is not permissible. Ownership, copyright and right of use remain and remain with the picture provider or photographer. The pictures are published exclusively with the provided legend, whereby always the photographer is mentioned by name. By downloading and using the provided documents you agree to these terms and conditions of use.