Humans’ perceptions of their world, which vary across geographies and history, have engendered manifold ways of engaging with it. The exhibits from the collections of the Kunstmuseum Basel and the Museum der Kulturen reflect the wide range of these practices. Under the collective title Making the World, the two exhibitions focus on different yet complementary aspects of how humans shape their world. The Kunstmuseum Basel’s presentation turns the spotlight on the human spirit and the capacity of religion to interpret the world.

Making the World. Spiritual Worlds arranges encounters between European and non-European objects. It is divided into four chapters: higher beings, inceptions, transitions, and absences. The selected objects as well as the myths and cults behind them inspire reflections on both their prodigious phenomenal diversity and their deeper unity.

In the thematic arrangements in the galleries, a Hindu creation myth featuring gods and demons at war meets the Olympian gods’ battle against the titans as depicted by Hans Bock the Elder. A Balinese ritual object that points the soul’s way is paired with the devils insisting on their title to a dying man’s soul in a painting by Hieronymus Francken II. Tibetan scroll paintings from the seventeenth century hold out the promise of admission to one of several paradises, while the Olympians in a roughly contemporary work by the painter Cornelis van Poelenburgh elevate the mortal Psyche to their own station.

The Hindu god Ganesha brings good luck and is amenable to entreaty; his abiding popularity is matched by that of Venus and Amor, the divine representatives of beauty and love, shown in a rococo painting. Shiva shines as the king of dancers in an Indian bronze that captures him in a dancing contest against the goddess Kali, while the twelve-year-old Jesus in a painting by Jan Steen (ca. 1659/60) awes the scribes in the temple with his superhuman wisdom.

Last but not least, some manifestations of the divine are indirect: in a painting from the workshop of Leonardo da Vinci, Saint John the Baptist needs to underscore his insistence that it is Jesus rather than he himself who is the foretold Messiah with a gesture that literally transcends him. A marble sculpture (1882) by Ferdinand Schlöth shows Psyche as a beautiful princess wandering the world in search of Cupid, the god of erotic love, who has vanished. And now and then, the absence of the divine makes it only the more conspicuous: Balinese Hindu temples reserve an empty throne for the gods who abide in them but briefly. Jewish ritual similarly knows an empty chair during the circumcision ceremony that is held for the Prophet Elijah, as painted by Ambrosius Skeit in 1503.

The exhibition Making the World. Lived Worlds remained on view at the Museum der Kulturen Basel through January 23, 2022. It put the focus on how humans and their environments are intertwined. Five thematic constellations of exhibits from both museums probed the themes of relationships, orientation, traces, and imaginations. 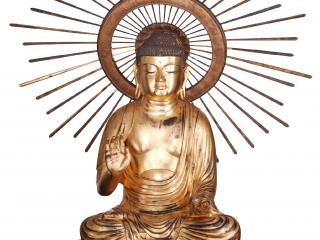