The Kunstmuseum Basel turns the spotlight on various private collectors who helped Marc Chagall (1887–1985) achieve his breakthrough. The exhibition I’d like a typical Chagall in the Hauptbau’s mezzanine gallery is anchored by the paintings in the Im Obersteg Collection and the Öffentliche Kunstsammlung Basel, the public art collection of Basel.

Private patrons and collectors played a key role in Marc Chagall’s early success. They lent financial support to the artist in politically difficult times and launched initiatives and projects that introduced public audiences to his oeuvre. Their motivations, however, varied widely: the Russian-Jewish art collector Yakov Kagan-Chapchay was interested in those motifs in Chagall’s paintings that were drawn from Jewish culture; the Basel-based collector Maja Sacher-Stehlin, meanwhile, was primarily drawn to Chagall’s visual language, which combined avant-gardism with echoes of Surrealism. Karl Im Obersteg, for his part, took an interest in contemporary Russian art in general.

These different perspectives on Chagall’s art also reflected the multifaceted nature of his oeuvre, which integrates the influences of the three major cultures in which the artist was at home over the course of his life: the spiritual world of Eastern Jewry, the art of pre-revolutionary and revolutionary Russia, and the surge of painterly innovation in French modernism. One hub mediating between these worlds was the Berlin of the 1920s, where Herwarth Walden produced the influential magazine Der Sturm and ran the gallery of the same name, which mounted Chagall’s first solo exhibition in 1914.

The exhibition “I’d like a typical Chagall” puts the focus on the circumstances in which Chagall’s works entered private collections and the collector’s motivations. It gathers the paintings and drawings at the Kunstmuseum Basel as well as photographs and documents from the Im Obersteg Foundation’s archive.

The show’s title quotes a passage in a letter Karl Im Obersteg wrote to Marc Chagall on October 23, 1935: “I’m rehanging my pictures a bit right now and what I’d like more than anything would be a typical Chagall in my living room vis-à-vis the Picasso.”

Guided tour in the exhibition «I'd like a typical Chagall» 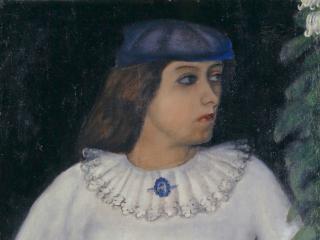