The Kunstmuseum Basel’s collections include around seventy engravings and etchings by the Netherlandish painter Pieter Bruegel the Elder (ca. 1526/1530–1569). Over the past few years, our conservators have undertaken a thorough review of these works, which we now present to the public together with selected loans.

With his ingenious and unmistakable pictures, Pieter Bruegel the Elder ranks among the preeminent artists in the Netherlands of the sixteenth century. His works are immediately recognizable despite the considerable diversity of his oeuvre: it encompasses landscapes, allegorical and religious representations, and scenes from the everyday lives of the peasantry. While his depictions are very much true to nature, Bruegel also often operates with exaggeration to sharpen his point. The artist is perhaps best known for his apocalyptic sceneries teeming with demons, which even in his lifetime earned him the sobriquet of a second Hieronymus Bosch. The lively action on the surface of his works almost always contains a deeper truth. Drawing on his own varied experiences and with evident wit, Bruegel takes aim at human foibles and flaws such as avarice, selfishness, and ignorance. Homing in on the moral questions of his time, his works still make us laugh and inspire wide-ranging reflections.

The exhibition on the mezzanine level of the Kunstmuseum Basel | Hauptbau presents the museum’s complete holdings of prints by the Netherlandish master, complemented by selected loans from the Graphische Sammlung ETH Zürich. The engravings and etchings after Bruegel’s drawings were produced in the workshop of the Antwerp publisher Hieronymus Cock (1518–1570), with whom Bruegel maintained a lifelong close relationship. Their collaboration resulted in over sixty works that spread Bruegel’s art and fame throughout Europe and still stand as testament to his inventiveness, erudition, and extraordinary sense of humor. 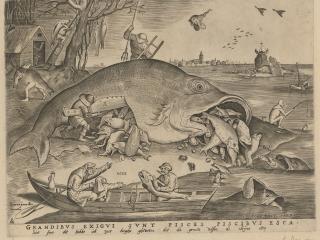