Alongside Hans Holbein the Younger, Arnold Böcklin (1827–1901) is one of the ‘patron saints’ of the Kunstmuseum Basel. The museum holds over 90 paintings and sculptures by the artist, making it the most important collection of his works in the world. In the late 19th century, Böcklin, who was born in Basel, achieved enormous fame in the German-speaking lands and is now seen as one of the key exponents of Symbolism.

Even during his lifetime, Böcklin was a controversial figure. Some saw him as an innovator, whilst others (such as the influential art critic, Julius Meier-Graefe) accused him of being a reactionary force, impeding progress in the arts.

Configured in twelve groupings, works by Böcklin are juxtaposed with those of his predecessors, contemporaries and unexpectedly like-minded artists, allowing key biographical, stylistic and thematic aspects of his oeuvre to emerge. The mood shifts between satire, an evocative melancholy and solemn sobriety.

The still unfathomable quality in his work, its irreconcilable counterposing of a wish for innovation with an adherence to tradition, reveals Böcklin to have been a true product of the Fin de Siècle, rich in inconsistencies as it was.

Further information here in the leaflet 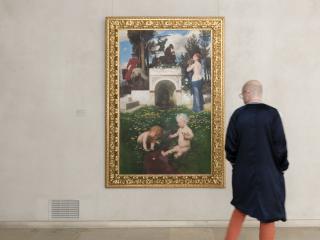